Andrea Leadsom [pronounced ‘led-som’] is the Conservative MP for South Northamptonshire. She entered Parliament in 2010, winning the new seat with a 20,000 majority. Andrea was elected to, and serves on, the Treasury Select Committee. She is Chairman of the All Party Parliamentary Group (APPG) on Sure Start and is also Co-Chair of the APPG for European Reform. She co-founded and champions the Fresh Start Project in Parliament, working towards establishing a new relationship for Britain within the EU.

Before becoming an MP, Andrea had a 25 year career in Finance and Banking.  Her career began in Corporate Finance where she worked for Wood Gundy Calatchi China Investments on investment opportunities for Chinese and Canadian joint ventures.  She then went to EF Hutton as assistant to a broker on the London Metals Exchange and carried out commodity futures trades on behalf of clients.

Following “Big Bang”, Andrea joined BZW, the investment banking arm of Barclays, in its Euro and Sterling Commercial Paper team.  Whilst with Barclays, Andrea spent a year in Barclays’ Sydney-based Treasury, involved in all aspects of treasury including Foreign Exchange, bank bills and hedging products.  On her return to London, Andrea moved to Barclays’ Structured Finance team for a year, and then became head of Barclays’ Investment Banks Group.  At age 31 she led a consulting project to reform Barclays’ entire wholesale corporate and institutional business, and then became Financial Institutions Director of the global banks team, at the time the youngest ever senior executive of the Bank.

To round out her banking experience, Andrea left Barclays to become the Managing Director of a new London-based hedge fund and spent two years building the team and the assets under management.  She spent the last ten years of her financial career as Head of Corporate Governance and Senior Investment Officer at Invesco Perpetual, one of the UK’s biggest retail fund managers.

Andrea has been a Trustee and Chairman of the Oxford Parent Infant Project (OXPIP), a social enterprise dedicated to promoting secure parent-infant bonding, since 2001.  In 2011, Andrea established the Northamptonshire Parent Infant Partnership (NORPIP), as a sister organisation to OXPIP. Andrea is currently in the process of establishing PIP UK, a new charitable foundation, whose purpose will be to help establish Parent Infant Partnerships around the country in 2013/2014.  PIP UK will offer practical and financial support for the establishment of new PIPs.

Andrea had wanted to be an MP since she was 13 years old and pursued her political dream through active political engagement since University.  She was elected as a Conservative  Councillor on South Oxfordshire District Council between 2003 and 2007 and contested Knowsley South for the Conservative Party in the 2005 general election.

Andrea was born in Buckinghamshire and educated at Tonbridge Girls Grammar School in Kent. She is a graduate of Warwick University and holds a degree in Political Science.

Andrea has been married to Ben since 1993 and they are the proud parents of three children. 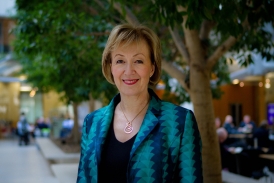