Phil is a true Northamptonian who cares deeply about his home Town and the wider County. He is a former Leader of Northampton Borough Council. Phil is honoured to represent the residents of East Hunsbury and Collingtree Park on the Borough Council, and the residents of Collingtree Village, Great Houghton, Hardingstone, Simpson Manor, Wootton Fields and Wootton Village on the County Council.  He works closely with the Parish Council’s covering these areas.

Phil welcomes approaches from residents of the areas he represents regarding any problems or matters of concern at any time by phone or E-mail.

Having been born in Northampton, and spending a lot of time during his informative years in Hardingstone, Phil has continued to live and work in the town.  He was educated at Cedar Road Primary, St Matthews Junior and Cherry Orchard Secondary Modern Schools.  Phil completed his education at Weston Favell Upper School in 1973.

Upon completing his education, Phil took up a career as a Civil Servant.  When he took early retirement in 2011, Phil was working for the Health & Safety Executive at Brackmills.

Phil was first elected as a Northampton Borough Councillor, representing St George Ward, in 1983 and continued until 1995.  He was then elected to represent East Hunsbury in 1999.  Phil became the Northamptonshire County Councillor for Nene Valley in 2009.

Outside of politics, Phil, who became disabled in 2006, enjoys watching sport.  He is a keen supporter of The Saints and a follower of Formula 1.  Phil also enjoys the Northamptonshire Countryside and Real Ale! 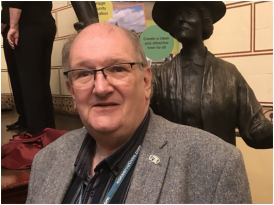